Darn it – unless you can describe them as ‘sporting equipment’, it looks like lockpicks are illegal in Canada. Guns are of course legal (with the appropriate licence) for sporting purposes,
but I guess people just don’t see lockpicking as a sport yet… I was very much looking forward to sitting on an island with my newly acquired lockpicks and the various locks I have bought, and spending hours attempting to open them. Not sure why it’s so appealing, but it is. Oh well, I’ve got a few books to read. Poor substitute, but will have to do.

Fantastic – off to Canada tomorrow. One week will be in/around Toronto/Peterborough (I’m actually not sure exactly where – it’s my grandparents’ cottage that we used to visit by the lake, but I’m not sure where it actually is given how young I was when we last visited), where we will mostly be staying on an island in the lake (there is a cottage on the island, but it has been untended for many years, so were expecting to be effectively camping EDIT: pictures here). Unfortunately based on my fuzzy memories of last time, the mosquitos have probably (through the generations) been looking forward to this almost as much as I have.

The next week will be a mining town in the middle of nowhere, 200m North of Toronto. This is where I was born, and where most of my father’s family still resides. It is somewhat greener now, I’m told, but it has always historically been (in)famous for being a pile of rock, and not much else.

Then after all that I’m training for a week in Oxford before taking a long weekend in Newquay to try the handmade surfboard (we actually were given the opportunity to watch the guy make it) my dad gave me for my 21st. It’s 3 years old, and I haven’t even used it yet… so I’m seriously keen to try it!

An old friend has put together a pretty amusing series of comics. I am not sure how broad the audience is for these, but they’re pretty good if you’re a geek! http://www.f8d.org/ – highly recommended.

God knows where he finds the time to do these – one every day apparently! 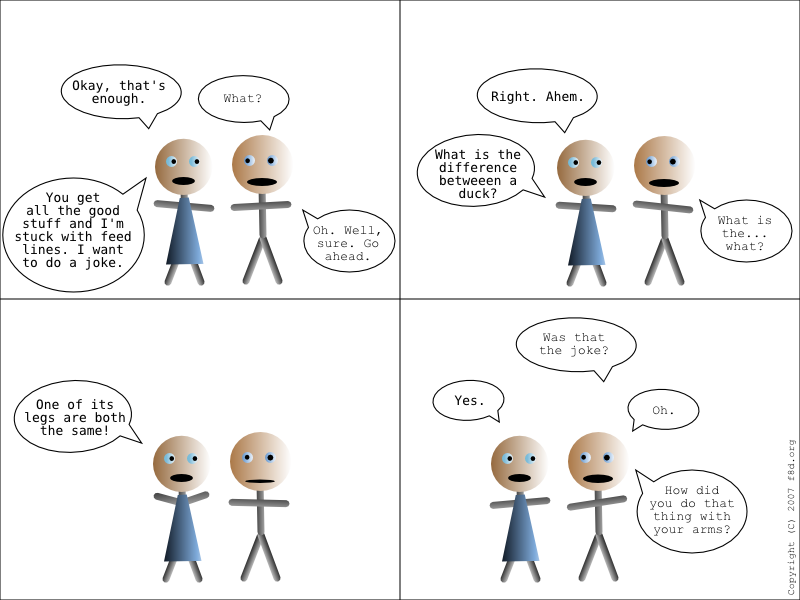 This is a tough one – the first solution I saw was to use WP-PHPMailer from Coffee 2 Code. However this left me with a “Warning: fsockopen(): unable to connect to smtp.mail.yahoo.com:25 in /home/www/james-scott.co.uk/…/plugins/wp-phpmailer/class.smtp.php on line 105″.

First I thought I could switch to Gmail – I tested it with Outlook, and it worked but only with SSL enabled. One of the things it helped with though was that it let me know I should change the port to 465 (secure port) but then I got “The e-mail could not be sent. Possible reason: your host may have disabled the mail() function…” error.

The issue is that even after you have this plugin set up, you then need to find a compatible SMTP server. And unfortunately this plugin doesn’t seem to work with SSL/TSL (which is required for most webmail SMTP servers, e.g. Yahoo!, Googlemail/Gmail etc). So what’s the solution? Use ShiftThis | Swift SMTP instead – with this one you can use SSL/TSL with your Gmail SMTP server (smtp.gmail.com) with the login details from your mail account.

Haven’t really put anything on films here yet. I am a film lover, though due to the constraints of the job I do, and having very little in terms of memory, I wouldn’t call myself a film buff. I started the Film Society at my company a couple of years ago, and have learned quite a few interesting things from the experience, which I hope to get on here. In the meantime, tonight was a major sponsored film night, for which the Film Society nominated Cinema Paradiso to be screened, which was chosen by my firm’s employees (over 1,000 votes cast apparently)! Our contribution in nominating three of the options including the winning one was noted in the Times (even if it was only in passing before spending the rest of the article slating Eragon).

Unfortunately due to the aforementioned work commitments, I have spent my evening firmly inside the office, and thus missed the screening…

In what is probably an astoundingly late revelation as far as the weblog world is concerned, I stumbled upon some Lonelygirl15 video weblogs on YouTube, and actually believed them up until the one where they go hiking (and I realised it was just too professionally shot to be real).Anyway, once I got over my disappointment that it wasn’t real, I realised it was a unique new form of film-making, and quite an exciting one too – I’d love to come up with some good ideas myself, but haven’t managed – I’m keen to hear anyone else’s ideas though…

I’ve finally begun revamping the site I started building some 4 years ago, in an effort to put all of my various creations and learning experiences online.

As of writing this, I have put up a significant number of pages onto my site already, with something on Wifi (incomplete) and something on picking an HDTV (an interesting exercise but needs some work).

I hope to add to this with something on films (particularly strange films, but also some less controversial ones I believe are classics for whatever reason), what Investment Banking is like (and what the difference between being in country, product and sector teams is), valuation of companies, buying property (starting with London) and augment this with bits and pieces on my university project (as well as some other content) from my old site. I may even add some pictures at some point!